Toby and Timmy were born in a home where there was essentially a hoarding situation going on. The home was dirty and food and other amenities were scarce. They were rescued and for a while lived with a kind lady who looked after them and taught them about being good pets. She made them feel loved and confident and they became sweet purr balls. Unfortunately in their hoarding house they picked up ringworm and with all the animals she’d rescued the rescuer got overwhelmed herself and couldn’t cope any more, so she took them to the shelter. Unfortunately, having ringworm at the shelter can be a death sentence. They have only so many spots in their isolation room and they can’t put sick cats in with healthy ones or all of them get sick. So these guys were on death row. Luckily the shelter called us and we scooped all 5 up and bought them to ks. We have nursed them back to health and now they are looking for homes. Toby is 5-6 months old old and fully vetted. His ear was tipped by the vet when he was fixed because he was bought in as a stray and they do that with strays so if they go back outside it’s easy to see that they are fixed and have had their shots. But he was much too sweet to be released outside. He’s very affectionate and loves to be petted and played with. 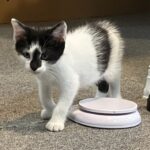 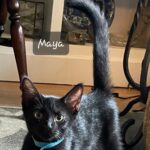 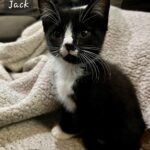 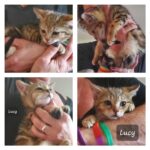